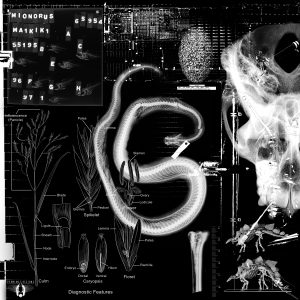 Artist Bio:
John T Allen possessed a passion for the arts from an early age and experimented with a wide variety of both physical and digital media during his final years of high school in the late 2000s. He attended the Catholic University of America School of Architecture and Planning where he earned his Bachelor of Science in Architecture in 2013, after which he received both a Master of Science in Sustainable Design and a Master of Architecture (specifically in the Sacred Space and Cultural Studies Concentration) in 2016 from their graduate program. In 2017, John began his “A Virtual Memory” project, an extensive collection of work blending both visual art and digitally-generated soundscapes as a means of building a continuously growing narrative centered around the themes of the temporal, especially deep time. John founded Permian Designs in 2019 as an outlet to showcase the entirety of his body of work dating from 2007 to present including collage, mixed media, photography, music, commissions, and architectural design proposals. He currently resides in Silver Spring, Maryland with his wife.

Artist Statement:
I have always been fascinated by the deep past and distant future, both of which have heavily influenced my personal outlook and creative journey from a very early age. There is something so inherently captivating about our very real but seemingly imperceptible connection to deep time, to moments long dead or so distant and abstract they can only be reached through decayed remnants of what was or conceived of only within one’s own imagination. The way in which these recontextualize our place in time, I feel, is vital to better understanding our humanity and the real value of time in our lives. As a means of seeking and expressing meaning in the world around me within this framework, my art primarily focuses on questions of temporality as explored through a wide range of mediums from mixed media to collage, digital art, photography, and music with a specific focus on prehistory, architecture, and the natural world.

The Tamar Hendel Gallery at CREATE Arts Center is open to visitors every Monday through Friday from 9:30 am to 2:30 pm when exhibitions are running. If you have questions, please contact us at create@createartscenter.org or 301-588-2787.

CREATE Art Center has operated in the Silver Spring community for over thirty-five years as a 501(c)(3) nonprofit organization whose mission is to spark creativity, foster learning, empower individuals, and facilitate community connections through the visual arts. Named after CREATE’s founder, the Tamar Hendel Gallery opened in 2019. It showcases local artists who work in a variety of media.